Delhi Gang Rape: A slap in the face of democracy

The 23 year old paramedical student, who was battling for her life for the past two weeks, called it quits today morning after having reported with multiple organ failure and fatal head and abdominal injuries. The girl was brutally assaulted and raped by a chunk of six men, in a moving bus, who were allegedly under the influence of alcohol that evening. She was accompanied by her 27 year old male friend who was beaten up for having tried to help her out of the trap of the savage beasts. The two, after being beaten up with iron bars, were stripped off and thrown out of the bus along the roadside of a flyover in mahipalpur area of Delhi. The two had been to a movie and were on their way back to their home when they boarded a bus headed towards dwarka,from munirka bus stop in Delhi.The shocker in this whole thing was that the bus was moving around the suburbs for around 40 minutes with its tinted glasses and curtains concealing the crime within. 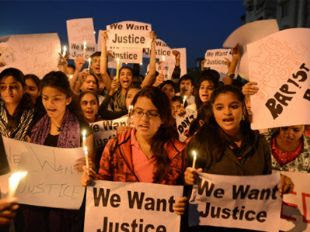 Easily one of the rarest-of-rare cases of rape in India, the incident received public outrage from all parts of the nation. The issue reached the steps of Indian parliament with several female MP`s demanding a severe punishment such as death penalty which will serve as a deterrent to avoid further replication of such heinous crimes in the country. People even showed agitation against the police. Delhi police is, undoubtedly, a guest to several blames and accusations for having proved its inadequacy in preventing and dealing with the repeated crimes of the same nature in the capital. The bus is said to have passed through three check posts that evening without the notice of Delhi police. The police patrolling vans, failing to keep a tab on the brutal event, added to the censure of the police.

The question that arises here is why does the government always come up with preventive measures after the milk gets spilt? This is surely not the first case of rape in the capital. Delhi has a record of 572 registered rape cases, according to the statistics of National Crime Record Bureau, reaching to an average of a rape every 20 minutes. Is this a fact petty enough to be ignored by the government? Why did the government turn a deaf ear to these crimes? Had the government taken prior action against such assaults earlier, that girl could be saved from falling victim to this social failure.

In addition to all this, the mentality of the backward people, which form a significant fraction of the population of Delhi, is something that deserves a larger share of the blame. A woman is accused of being uncultured, having a westernized lifestyle, and hanging out with male friends. Her attire also receives a speculation of being one of the triggers for having lured the attackers. Common, how can you justify such inhuman acts with such a retarded school of thought?  We are living in a democracy. A woman will live a lifestyle she chooses for herself. These men are no-one to comment on that, leave aside the blame of luring them. Where is the Indian culture that we all always boast about? It is incorrect to seek that culture in a woman`s dress-up, for culture starts with morals,that`s more profound than clothes and that’s something the convicted men lack big time. So stop talking about culture until you inculcate that within yourself first.

Well, this accident is a social failure of all the elements of the society altogether. The judicial system stands out as the weakest link among-st all. Lenient laws that can be tripped easily , absence of harsh convictions, delay in the entire process of trials and hearings, all these facts serve no purpose in deterring the feeble-minded culprits from refraining themselves from committing such crimes. An unyielding set of laws should be brought in as a substitute to these merciful way outs. The judicial system needs to get stronger and remorseless against those convicted.

Certainly, the capital of world`s largest democracy has witnessed such a barbaric act ending up abasing every definition of democracy. It’s high time we see a change in the outlook of people, in the government strategies, in the system of judicial laws and in the obligation of our protectors-the police, for this nation has many more daminis to protect! (Sigh)
Posted by Rucha Agrawal at 00:11 No comments: